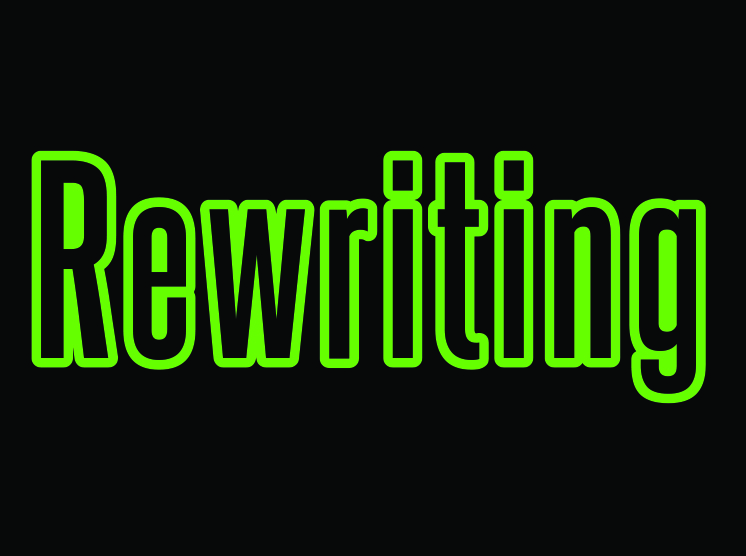 I should be writing. No, seriously, that’s what my brain is screaming at me right now. Writing. As in, new words on the virgin white page. Err, screen. Scrivener file, new chapter. You get what I mean.

What am I doing instead? Sifting through a manuscript that I’ve already written, started on Tuesday, July 26, and pretty much finished in late November–when I realized that what I’d written was not the first half of a book, but the complete book, and what remained of the idea would be the next volume. If you’ve interacted with me in any shape or form in the past weeks, you probably know that already.

Writing has been a bit choppy for me over the past couple of months, either no progress at all or happily puttering along, and while the manuscript feels fluid–and very solid–to me, it has its flaws. They all do at the first draft stage, that’s how it’s supposed to be: it’s the very first version of a story. I love writing first drafts, and I’m a relatively clean first draft writer, so sometimes all that’s needed is a light copy edit (hunting typos that I missed while I was typing fast, and the odd repetitive phrases) before it goes out to be presented to someone’s eyes who is much better at polishing these things–and doesn’t have my uber smart brain that thinks it’s a good idea to read what it was supposed to have typed rather than what is actually on-screen. That’s why everyone needs an editor. You simply can’t do it all yourself. You’re too bright for that.

This time, not so much. Yeah, the smart thing, too, but I was referring to the clean first draft. Well, it is clean now that I’ve gone over it twice, but it’s not a finished draft ready to head to the editor and beta team. Not only is it a little on the short side, but it’s missing a few cohesive bits that as I keep thinking about them become more and more important. I hate downtimes when writing, for obvious productivity and related paycheck reasons, but this book needed it. For instance, last weekend I worked out details of the backstory that will factor more heavily into one of the future books but I ignored it so far as I didn’t need it now, and a vague sense was enough. Now that I do know I’ve realized that, in fact, the backstory already is causing ripples in the books, has been the driving factor in actions of various parties in book #7 (yes, I’m looking at you, Bucky!), and can have a huge impact in this book as well.

Long story short, I’m in rewriting hell. Not only am I adding a few details and the odd conversation that I cut before because it wasn’t necessary, but I’m also retroactively influencing my characters’ actions because of that new information that’s suddenly there.

I can’t tell you how much I hate this.

Not the new info part. And not the influencing. That’s actually great. I can’t wait until I’m in the later chapters where there’s an entire new conversation that is probably the second most fun scene in the entire book for me to write. It changes so much for me, the creator, and I love having those enlightenment moments when I myself go “A-Ha!” at something that’s been roiling around in the recesses of my mind for years.

No, I hate the actual rewriting of the book.

I’ve done it before. My first ever published book had 4 versions, and some parts of that have been regurgitated and reused so many times that I pretty much know them by heart. As in verbatim. And then they were cut because they weren’t essential. Turning Incubation from a biotech thriller to the starter of a zombie apocalypse series was peanuts compared to that. Including changing the time table inside the book and switching the title from “24 hours” (or at one time, 48) to what it is today. I also ran into massive pacing issues with that first romance series of mine when I realized I needed a 4th book to finish the trilogy. Yes, I’m one of those writers! I was. One of the reasons why I generally guard my romance alter ego like a hawk is because those books are decent, but they have massive flaws. I learned so much since then. Actually, I’m pretty sure the Green Fields books are 300% better because of the mistakes I made in the past. But even in this series, I’ve had to break my outline with every single book, and the 5th, Resurgence, had at different times two different endings. The first was earlier, when Bree came to the Halsey settlement, and realized someone she’d presumed dead was still alive (trying to keep this spoiler free). The other possible ending was at 1/3 point of the 6th book, Unity, before they set out south (again, trying to avoid spoilers! I’m sure you remember what happened). Both were great ending points. Both were mild to moderate cliffhangers. I ended the book in the middle of the story between both events because it also felt like a good place to stop, and it was already at over 142k words or almost 600 paperback pages. It was good that I stopped there because Unity ran even longer, anyway, and would have started with a drag otherwise. My point is, just because when I plan a book I think I know where it ends, that’s often not the case, and experience has taught me to trust my gut on this. If it doesn’t feel right, it’s not.

But for the life of me, I wish I’d known two months ago that #8 (still untitled, eeeep!) would actually become two books so I didn’t have to streamline it that much to begin with… and wouldn’t be sitting in rewriting hell now.

Not all writers are first draft writers. A lot, in fact, hate first drafts; for them, the magic is in going back in, fleshing out the skeleton of the story they pretty much vomited onto the page in the first run, and in several turns craft this magically perfect manuscript that then ends up being the final book. I sometimes envy them because they can’t measure their productivity as actual words written each day, so taking longer to hone the tale doesn’t feel like constant failure to them. It does to me. That’s part of why rewriting is stressing me out. Yesterday I “wrote” five words in four hours! Of course I know that it was much more, that I deleted words and entire sentences and later added others at different points, but the bottom line I have to show for all that is five fucking words! Argh!

I also hate that I couldn’t get it right the first time. I hate that I’m chewing through parts of a story that I’ve been over what feels like at least three times too often. I’m afraid I’m smoothing over too much and that I’m losing what’s “unique” to my writing voice. I’m spending my entire day with my editing hat on, the critical voice in the driver’s seat, and I’d rather run around screaming wildly like the 2-year-old that my creative voice resembles. Critical voice is also awesome at making me feel like the worst writer in the world. Creative voice is 120% convinced I’m the best writer to ever tell a story!

So why this blog post? Because I’m miserable, and now I’ve stolen five minutes of your time and we can be miserable together! No, not really. I’m still convinced my blog posts are hilarious, funny, and very deserving of the time they take you to read them. I know you’re waiting for the book. Or the beta copy. Or the promised open call for beta readers so you might start waiting for your beta copy. It’s going to take me a little while longer than I expected. No, actually, I expected to take until right before Christmas to get this done but I was hoping to have it wrapped up sooner. That’s the first draft writer in me talking, who calculates a book to take two months to write, one week to proofread myself, then four weeks with the editor and beta team, and then a last week for me to implement all that before I release it into the great wild world out there. There’s no time calculated for having to go back in and turn half a book into a working full book that reads as if it had always been intended as such. That probably adds a month, which fits the realistic schedule perfectly. I’m just not happy about it because, miserable. Fuck. Rewriting.

Every writer is different. Heck, every book is different. As I told a friend yesterday, this is my 15th book, you’d think that by now I’d have a clue what I’m doing. I don’t. Not always, and not in all the details. If you gather ten writers, they’ll likely tell you fifty different ways to write a book, and all fifty, plus the hundred extra ways they forgot to mention, are all “the right way” to write a book. So if you’re a newbie writer, never let anyone tell you that what feels right to you isn’t. If it’s actually wrong, sooner or later you’ll realize that and move on to do better next time. If you’re a seasoned writer, you’re likely cringing right now at all the right books that are actually wrong but sitting on kindles and shelves all over the world right now that you can’t change anymore. I’m cringing all right. I think it’s part of what makes me a better writer than I was in 2014, so that’s okay. But if you’ve ever wondered why sometimes we, the authors, can’t tell you when a book will be done although we technically have finished writing it, now you know. I’m back to rewriting now because complaining about something never made it easier, and with every line that I correct, I’m closer to that phenomenal extra scene. Mwahahaha, mine is an evil laugh!