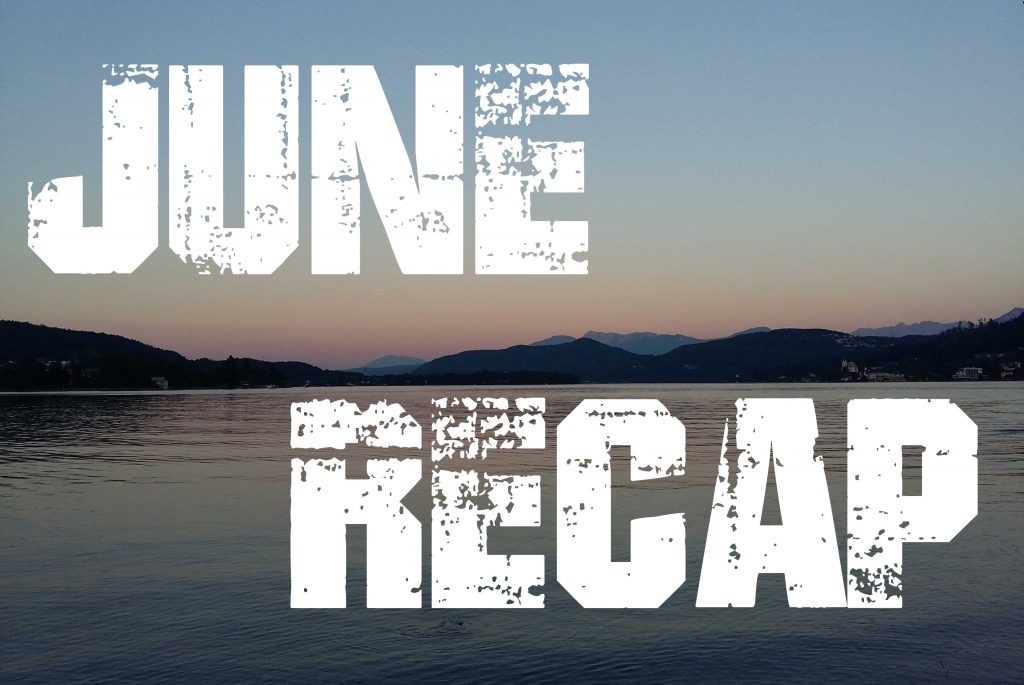 Note: I’d like to make this a regular monthly feature. Maybe the writing part will end up on my Patreon page (exclusively, including more background info and teasers) once I launch it. We’ll see. No actual content here, but as much of a cohesive update as you’ll likely ever get.

In June, I managed just shy of 35,000 words. In pages, that’s 140 paperback or 100 ebook pages. Could have been more, but also so much less. June has actually been my most productive month of the year so far, beating February and the insane week of finishing Unity (GF#6). Strictly speaking, those were only the first two weeks of June as I was on vacation afterward and no work was done those days! Not entirely true—I needed the time off (particularly after learning the lesson from last year and how working non-stop through my vacation ended up being the kick in the nuts that landed me in months of burnout, but I digress), plus I needed some extra time for story plotting.

While I knew where I was going with the story when I started writing it in April, there were a few weak or vague points that still needed to be ironed out. Just before I got to the pivotal part in the plot that set up the climax, I realized that I needed to drastically change my ideas (which involved the famous “kill your darlings” decision to cut out a scene I really, really would have loved to write, concerning Nate’s background), which resulted in a massive cut of material—that, of course, needed to be filled with something else. So I spent most of my vacation fleshing that out anew so I can now sit down and write it! Certainly made the story 110% tighter, and did away with some concerns I had about the initial ideas. Wouldn’t have wanted them all to starve and freeze to death, right?

I also proofread and edited the first 73k words of the book that I had already written, and except for one scene (that I will expand now that the cut toward the end has been made can do with a little more material) the already written part of the first draft of the book is about ready to go to my editor. I’ll wait until it’s complete, but it’s always good to know that I have half of the work that I really don’t like already covered.

No predictions yet when the book will be done—and published!—but progress is good, so it won’t be another nine months without a release, no worries there.

I’m going to write two short stories—one from the Green Fields universe, the other from my upcoming sci-fi setting—for anthologies over the summer, did some planning for that. You can thank my guy for both ideas because he was the one reminding me that I wanted to write that, anyway. Both anthologies will be released later this year, I’ll keep you posted once I have all the details. I’m generally not a short story writer so dipping my toes into that should be fun!

Still excited that the Unity audiobook (UK) keeps selling well. Even more excited that I worked out some kinks in how I get my audiobook royalties. Less effort, more money—always nice!

Wasted the usual years of my life on accounting and taxes. Got the ebook royalties from April, which was awesome as that was the Unity release month. After two consecutive months in the red that was dearly needed. Overall, the year’s doing okay, particularly considering the gap in publishing between July 2016 and April 2017. With things looking better for the second half of 2017 I’m optimistic I can hack it full-time at least until 2019! Amazing news, if you ask me!

And, of course, I started the blog!

Still hashing out the details of my Patreon project. I’m going to write a blog post about that soon, but it likely won’t launch before October (need to work ahead to make sure I got all my bases covered).

I finally need to get the cover commissioned for the next book, but I have some ideas.

I tend to have a really weird taste for what I listen to while I write, but for the past two months that has been bordering on socially acceptable. GF#7 has a soundtrack: The Prodigy’s The Day Is My Enemy (UK). Besides Pendulum (UK), they are the only band I listen to for enjoyment and background noise for writing. Also, City Lights by Blanche (UK), this year’s #4 of the Eurovision Song Contest. Listened to lots of bad pop music during the vacation, anecdote see below!

I am ashamed to say that I only read two books in June, and none of them in genres I’m comfortable recommending (aka admitting I read them). But if you’re looking for a great fresh series, check out Eugene Kirk’s Once Giant’s series! The Neon Amazon (UK) (prequel novella) is hilarious! Former WWE-style space amazon as the main character. You really should check it out if kickass girls are right down your alley! Review coming up soon.

Most of what we’re regularly watching is out of season right now, but we’re hooked on Expedition Unknown. Loving the current season of iZombie (UK)! They really got their groove back after a somewhat meh ending of the 2nd. Bad zombie fan that I am, I’m still 2/3 of a season away from starting season 2 of Fear the Walking Dead—shame on me! One of these days I will catch up! Like with reading, I didn’t get that much TV time clocked as I was working on my book. Story of my life! (And so not complaining!)

We wanted to go see Wonder Woman in the cinema but they only had the movie on the big screens and IMAX for one week that mostly coincided with our vacation, so I have to wait for the release on BluRay. No, I don’t think whoever does the cinema release schedule in Austria has two working brain cells. It got replaced by the latest Transformers movie as the current blockbuster.

If you’re following my personal facebook account, you know that I got a gym membership in May. Still going strong in June—best decision of the last years! Right now I lift about 2 days a week and swim on 5, coming up to 6.5 hrs in the pool. Before you ask, no, I can’t spend that time plotting my next book (my brain works in mysterious ways!) but I’m getting myself a water-resistant mp3 player so that I can listen to podcasts. So technically, I chalk that time down as work. Yay! Not going crazy with boredom should be a bonus either way. As my gym is right across the parking lot from my office, I barely have any excuse not to work out when I’m in here, pretending to be an adult, and I blame that kind of new daily schedule for how productive I’ve been in June. Setting 5 hours a day aside for work, followed by two hours of swimming / lifting, then adding another 1-3 hours in the evening has helped me get at least something done every day, and more often than not that happened to be GF#7.

Vacation! In Carinthia again. I say again because it’s been something like the 20th time in my life that I went there (great for summer, winter, and year-round vacations).

I forgot to take my camera with me, so you only get a collage of crappy phone pics:

Because we had typical June weather (hothothot!) we spent a lot of time either hiding in the car, hiding in museums, or hiding in the mountains. I got to really put my car through its paces, going up and down the narrow, winding mountain roads. Yes, I actually view driving time as the fun part of vacation because a) I loooove my car (surprise, surprise), and b) that left me lots of time to do some story plotting for the next Green Fields books. Yes, the car above is actually my car, not our car, or my guy’s car. And I drive. Exclusively. I know, you would never have guessed!

Funny anecdote from driving: Because our favorite radio station isn’t available in southern Austria, we were listening to the most popular pop station instead, which has the habit of repeating the same fifteen songs over and over again (providing the involuntary soundtrack to my story plotting). Nothing too bad, but one of the songs on repeat was Harry Styles’s Sign of the Times (UK). I’m not exactly a fan of him or his previous projects, but we agreed that song was PERFECT for a last scene in a movie that pretty much ends with everyone dying, in slow motion, in a very graphic, bloody way. Think Tarantino-style gore, eyes wide, blood spraying, people falling… glorious! Might have been influenced by the ending of the first season of Westworld (UK) where they used a rendition of one of my all-time favorite songs for such endings, Radiohead’s Exit Music (For a Film) (UK). I remember listening to that song on repeat back in the 90s, thinking that it would really be perfect for a tragic ending. Welcome to a glimpse into how my brain works.

What’s up for July?

– Writing: Finish GF#7, plus two short stories. I might start on GF#8, but considering that the end of #7 will kill me, there’s only a 20% chance of that happening. Maybe a few more short stories to get things set up for Patreon. I also need to order some preliminary paperback copies to see if it’s even feasible to do short story paperbacks for Patreon. Are you guys interested in that, or just the ebook version?

– Personal: I plan on working through the summer, so that will be fun. Maybe I’ll manage a side plank until August? We’ll see!

– Depending on how much time GF#7 will eat up (the last month of writing is usually the worst) I’d really love to get some reading time in—suggestions also welcome! Little known fact: while I love reading (like most writers do) I rarely have the time for it, unless I deliberately schedule it (also something a lot of writers lament). My creative juices flow best when I’m in the zone, and reading helps keep me there.

Hope you get to enjoy your summer!

(This post contains affiliate links. If you click the links and happen to buy anything from Amazon, I get a tiny commission from them for sending you over, at no extra cost for you, of course. Sorry for the clunkiness of the links but I have yet to figure out how to do it best. So for now you get the UK links in brackets)

Why I Love Being An Indie Author