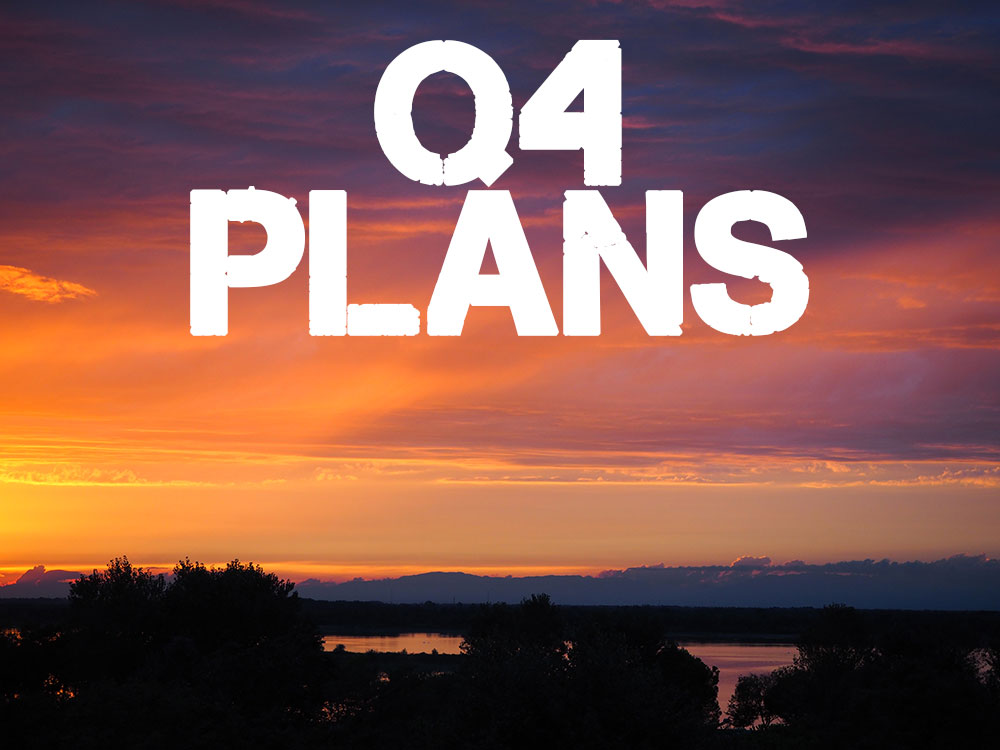 Instead of boring you with a September recap (hint: September was kind of a dud for me) I’ll entertain you with what I have planned for the remaining quarter of 2017!

But first, a very, very short recap of what happened in September, because I’m a glutton for punishment. Beware, personal stuff ahead.

Exhaustion hit me like a freight train at the beginning of the month. You’d think that after publishing 13 other novels, I’d expect this to happen, particularly after a very, very productive summer, but noooooo. Not only was I toeing a mini-burnout from several months of constant productivity, but as usual, the release was strong, but numbers only started to really pick up in week 3 post-release. A lot of writers who still have a day job dream of doing it full-time. Let me tell you, if you’re all in, waiting until you have the data to start crunching the numbers is excruciating. Or maybe that’s just me. Don’t worry, most of my fretting was for naught, but it adds a nice layer of stress. Of course then karma had to swoop in and remind me that good things come to writers of gory horror stories, and one of my all-time favorite authors shared a promo I was running, giving it a great kick that still keeps burning. Yes, I once again embarrassed myself fangirling all over Bobby Adair. I swear, if I ever meet him in person, I will apologize. But I have no regrets!
Then there was the vacation in Italy (I posted a pic in the new facebook fan group, and the header image is taken from our room’s balcony as well), which was amazing, but since my mind was still on a bender, it took until the last few days for me to really come down and relax. Then, of course, within hours we left the sunny, warm late summer beach of Bibione and drove home to November weather Vienna. Cue in the worst case of SAD I’ve had in years! I’m a little better now but damnit, I’ll need a long, sunny October to get me ready for actual winter!
Oh, and this week I bought a new motorcycle after selling my old one. You only live once, as they say!

Now what’s the plan for the next three months:

If you haven’t joined my super duper Fan Club on facebook yet, do so now! It’s a great place to stay up to date with information, and it won’t get swallowed up by endless processions of cute cat pictures! Unless I post a few of my cats. Promise, never more than one or two at a time! Great stuff going on there right now! Including me being a dork, but what else is new?
You can read an exclusive teaser for GF#8 in the group, and more to follow.

On the future of the blog:

Not sure what I will be doing with this. Right now, the fan group is the best place to share information. Of course, I can share the blog posts there, too. I still have some written that need editing before posting. I will get there eventually. I will also be sharing stuff all through November for the events, and I have, tentatively, considered abusing the blog for an accountability thing for NaNoWriMo, kind of a way to give you a real-time behind-the-scenes update how things are going (an almost-guarantee for me to get stuck, but hey, not the craziest idea I’ve had this week!). We’ll see! Not fretting this. Just telling you that if you want to stay up to date, the fan group is the place to go, also for blog updates.